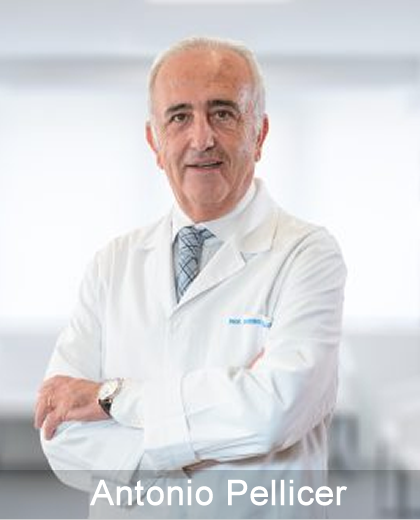 Professor Pellicer founded the ‘Instituto Valenciano de Infertilidad’ (‘IVI’) in 1990, and his work in the field of fertility has led to the creation of many ‘IVI’ clinics both in Spain and internationally. He is also President of the ‘IVI Foundation’ for the Study of Reproduction and Director of ‘Equipo IVI’.

He is Professor in Obstetrics and Gynecology since 1999 and Dean of the University of Valencia School of Medicine, Spain from 2006 until 2012.

He is also Chairman of the Department of Obstetrics and Gynecology at ‘La Fe University Hospital’, Valencia, since 2009.

Professor Pellicer is an Executive Committee member of the ESHRE (European Society of Human Reproduction and Embryology); and also of the International Federation of Fertility Societies.

He has been President of the Sociedad Española de Fertilidad between 1994-1996. He is currently member of the Comisión Nacional de Reproducción Humana Asistida.

Professor Pellicer has authored over 300 textbook chapters and more than 800 journal articles in national and international journals, and presented over 475 lectures in a congresses. He is Co-Editor in Chief for the journal ‘Fertility and Sterility’ since 2011 and he is member of editorial boards of several scientific societies.

Professor Pellicer have earned it several awards for his contribution to the field of reproductive health, which include the following: he has been seven times awarded the Annual Meeting Prize Paper Award by the American Society for Reproductive Medicine, XXV Society for Gynaecological lnvestigation President's Award in 2002, Rey Jaime I Prize in the category of Clinical Medicine awarded by Foundation Premios Rey Jaime I in Valencia in 2004, Gold Medal Prize of the College of Physicians of Valencia, in Valencia, in 2006, Rotary Flame Award 2007: of Sciences in Valencia in 2008 and Lilly Foundation Biomedical Research Clinic Award 2008, awarded by the Lilly Foundation in Madrid in 2008, and he has recently been named Doctor Honoris Causa by the Polytechnic University of Valencia, in Gandia, Valencia in 2011. Pro Academy Prize 2013 rewards their efforts in science and academic life, awarded by The Round Table Foundation. Valencia, 2013. Innovation Award at the XVII edition of the Enterprising of the Year Award organized by Ernst & Young, Madrid, in 2013. Prize "Jacques Salat-Baroux" by the National Academy of Medicine of France, Paris, France, 2014. IVI is named Honorary Ambassador of the Marca España in the category of Science and Innovation. Madrid, Spain, 2015.