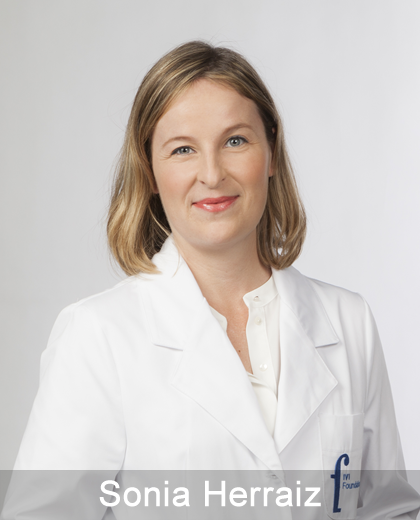 Dr. Sonia Herraiz is a full-time scientist at IVI Foundation leading the Ovarian rejuvenation and Fertility Preservation research group, visiting scholar at Stanford University Medical School in the Department of OB/GYN, member of the Reproductive Medicine group at the Instituto Investigación Sanitaria La Fe, and part of the Fertility Preservation Unit at La Fe University Hospital in Valencia.
She graduated in Biology at University of Valencia in 2003, and joined IVI Foundation in 2006 where she obtained her PhD degree by the University of Valencia in 2010.
Her scientific career is focused in the achievement of ovarian rejuvenation by several approaches like the autologous stem cell transplantation or the ovarian fragmentation. She is also focused in the development of new alternatives for Fertility Preservation in cancer patients where the ovarian transplantation is contraindicated, the improvement of ovarian tissue cryopreservation and transplantation techniques as well as. She has participated in several projects funded by the Spanish Ministry of Economy and the Valencian Health Agency as well as from different private institutions.
As a researcher, she completed a one-year postdoctoral stay at the University of Edinburgh (2012-2013) and a 1.5-year stay at Stanford University (2016-2018).
She has authored over 20 peer-reviewed scientific papers and book chapters in international journals and presented over 30 communications in congresses. She has been prized by the Spanish Fertility Society in 2016. Furthermore, is ad-hoc reviewer for different journals classed within the top-ten of Ob/Gyn and has been prized as Star reviewer by Fertility and Sterility.
Professor in the Master’s Degree in Biotechnology of Assisted Human Reproduction (University of Valencia, UV) since 2016. Is co-director of 6 Thesis projects in UV and 3 Degree Final Project in Biotechnology at Polytechnic University of Valencia (UPV).
She has participated as a lecture in several courses and workshops organized by the International Society of Fertility Preservation, Spanish Society for Fertility, Spanish Society of Medical Oncology and IVI.

Teaching experience in Workshops and courses