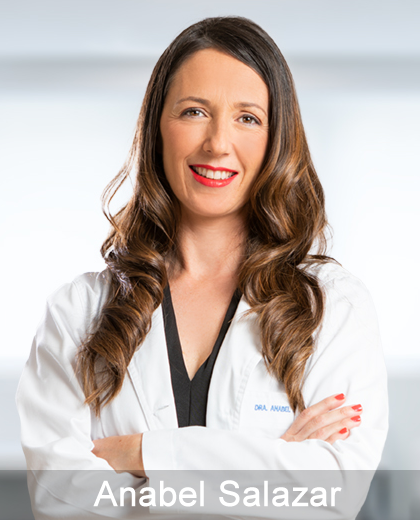 Anabel Salazar is Medical Director at IVI Málaga, Spain, since 2013, where she serves as an attending gynaecologist in the  Reproductive Medicine Unit. She is Professor of Master Degree in Human Reproduction at Rey Juan Carlos University,  and European University-Madrid. Spain. She obtained her Degree in Medicine and Surgery at  University of Cadiz in 2002, and completed her specialization  in Obstetrics and Gynecology at Juan Ramón Jiménez Hospital of Huelva  in 2007. She performed her Fertility training at IVIRMA in  Madrid and Seville. She finished her Doctoral Program in Obstetrics and Gynaecology. Human Pathology Department. University of Seville in 2006, and obtained the European Certificate of Gynaecological Endoscopic Surgery in Clermnont Ferrand during 2004-2005. She completed her training in Level III of ultrasonography in Obstetrics & Gynaecology by the Spanish Obstetric and Gynaecologist Society (SEGO), 2015. She has participated  in several clinical research projects. She has contributed as  author and coauthor of several textbook chapters and poster presentation focus on reproductive medicine.  She is member of European Society for Human Reproduction and Embryology (ESHRE), Spanish Fertility Society (SEF) and Spanish Obstetric and Gynaecologist Society (SEGO). She coordinates several courses related to reproductive medicine. She has participated as a speaker in several national and international conferences related to reproductive medicine and digitalhealth.